You are here: Home / Articles / When Consulting Projects Go Sideways

Every consultant has at least one project horror story, though some of us have seen more than others. You may call it the project from hell, the death march, or the one that ended up in the ditch. If you haven’t experienced a project that’s gone sideways, consider yourself in the lucky minority.

That euphoria often sows the seeds of future trouble. In one case, a giddy project team was confident that the project approach would literally transform the company. But the team was stymied every step of the way, and they squandered almost $6 million before the client’s executive committee closed the project down.

In the planning phases of that $6 million debacle, the project team had worked through the plan to make sure the project tasks could be completed. Sadly, the team failed to focus on the possible minefields ahead.

How to Stay on Track

Here’s a tool to help you keep project setbacks to a minimum. Use the simple 2×2 matrix below to sort out potential problems and create a strategy for handling most anything that gets thrown at your team. 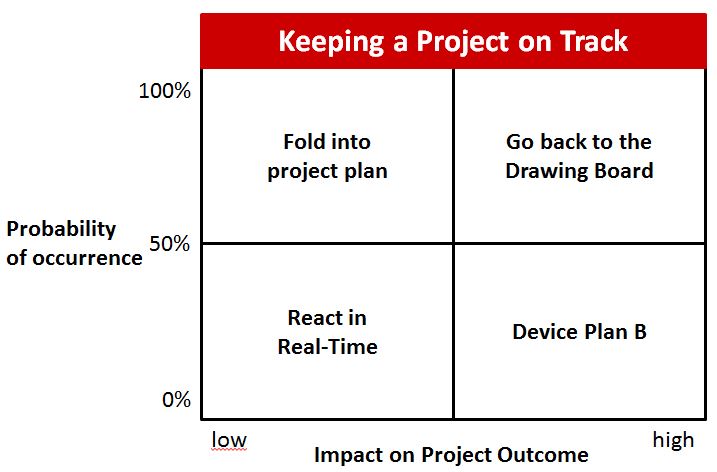 Begin by making a list of every conceivable predicament that could crop up, no matter how impossible it seems. Once you have your doomsday list, use the matrix to categorize each predicament in two ways.

First, assess how the event might impact the project. A low impact event may slow the schedule slightly, while a high impact one could mean project cancellation. Then, forecast the probability of each event occurring. The categorization process is more art than science, but it helps you focus on anticipating risks, rather than waiting to be blind-sided.

Usually, project teams resist this kind of thinking; they prefer not to focus on the negative aspects of a project, especially during the euphoric outset. Like it or not, the beginning is the best time to get the potential pitfalls out in the open.

Harvard professor and author, Rosabeth Moss Kanter, observed that when groups focus on “the things that could go wrong—including nuclear war—they also feel stronger because they’ve anticipated the worst. The next question is, now that you see what could possibly go wrong, what do you do to be ready for it?”

What Does It Mean?

These surprises can be handled by reacting to events as they unfold, rather than creating an elaborate strategy in advance. For example, a project team discovered that its assigned room had poor cell phone reception. That had a slight impact on the project—until the team was outfitted with pagers, which had good reception.

It was a nuisance that didn’t seriously impact the team, and it was resolved immediately. There will be snags on every project, and the team can usually react as needed.

These events may slow the project only slightly, but given their high probability, plan your reaction to roadblocks in advance. In one instance, poor weather prevented the clients and the consultants from traveling to crucial meetings, causing decision-making delays.

Because the project was occurring during a Midwest winter, the project managers wisely planned for project slippage specifically due to bad weather. The impact of high probability events should be explicitly considered as the project plan is crafted.

A high impact event can completely derail a project, so focus planning efforts here even if the event probability is low. For dilemmas in this category, you definitely need a Plan B.

Take the case of the project manager who suddenly fell seriously ill. The project fell off schedule immediately. The team’s lack of a suitable replacement caused a long delay in the project and confusion among the team members. For high impact/low probability events, be sure to have fall-back options, like a sure-footed leader to step in if an emergency occurs.

You want this quadrant of the matrix to be empty. If it isn’t, run for cover. In one case, a project team began work with only 50% of the required team members. The scope of the effort and the capacity of the team were completely misaligned. The result was a high probability—more like a certainty—that the project wouldn’t get done. Retooling the plan is the only way to avoid project disasters.

Look back at your projects that worked well and those that didn’t; both will provide valuable clues about potential problems. Consider these ten common surprises that can put any project team on the ropes.

Michael W. McLaughlin is the coauthor, with Jay Conrad Levinson, of Guerrilla Marketing for Consultants. Michael is a principal with Deloitte Consulting LLP, and the editor of Management Consulting News and The Guerrilla Consultant. Find out more at www.guerrillaconsulting.com and www.managementconsultingnews.com.

Our book recommendations on Project Management