You are here: Home / Articles / Corporate culture – Do not underestimate its impact on merger success

It is widely recognized that cultural differences between the partners of a merger are one of the most common reasons for failure in mergers. This may happen during pre-merger negotiations or during post-merger integration. Despite all Due Diligence, the two partners of a merger fail to form a new successful unit that is able to exploit all synergies.

Often, the term ‘corporate culture’ is used to describe issues like objectives, personal interests, behaviors etc. Many problems in cooperation and teamwork are blamed to culture. However, in a merger, ‘culture’ is more than making the people from both partners work together smoothly. The development of a new, shared culture is a critical factor for merger success. It is possible to manage this process in a structured way.

Key takeaways for the busy reader

The establishment of a desired corporate culture is a critical success factor in post-merger integration.

The first steps for this process should be taken as early as possible. A helpful tool is the cultural analysis. It reveals differences in how the cultures of both partners in a merger are perceived by their employees. Thus it identifies potential areas of conflict.

To impose an unwanted culture is a risky approach. It may lead to cultural resistance. Integrating both cultures in a carefully managed process is more difficult. However, in the long term, it promises better results.

Characteristics and impact of corporate culture

Corporate Culture is embedded deeply in the organization and in the behavior of the people there. It is not necessarily equal to the image the company gives itself in brochures and on the website. Therefore, it is difficult to determine an organization’s culture from the outside. In pre-merger negotiations, time and confidentiality are critical factors while trust still needs to be established. In this situation it can be a challenging task to find out if the cultures of the potential partners fit together.

Corporate culture is determined by a variety of different factors:

The concept of corporate culture is best described by the sentence

The way we do things around here.

The cultural onion skin and its impact

(Adapted from Geert Hofstede’s concept of the cultural onion skin, for more information about the different levels of corporate culture see An organizational cultural perspective)

There is no one right culture for an organization. There are only cultures that are more or less suitable for the particular situation and strategy of the organization.

In practice, several cultures can exist within one organization. This may more often happen in larger, diversified companies, when some divisions / departments start to develop their own ways to do things.

In the result, there are three types of cultural differences

In practice we can find problems of cultural fit in following areas:

Cultural problems can develop unexpected dynamics in such situations:

Research on merger success often reveals that cultural differences are a typical problem in many mergers: That the more powerful partner imposes his culture on the less powerful one. This is done without any evaluation which culture would be the more suitable one for the new organization. This approach may lead to a quick and successful merger and integration only in some situations. In other situations, however, this approach will destroy much of the value that was expected to grow from the merger. Especially when both partners are very different, a closer evaluation on which culture will be best for both together is highly recommended.

Why is corporate culture that important?

Corporate culture influences the performance of an organization, since it determines

A perfect integration (which is rarely achieved in practice) would develop a new culture form both former cultures of the partners. Ideally, this new culture should include the best elements from both organizations. Reality often looks different.

We can distinguish the following types of cultural integration: 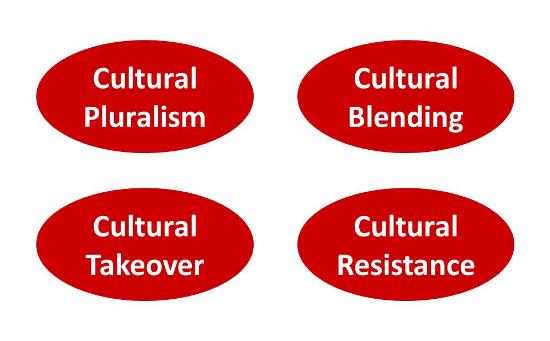 Cultural pluralism does not work in most cases. Cultural blending is the desired objective in many mergers. It may be successful if it is carefully managed and if both original cultures do not differ very much. However, the risk of failure is high. The results are cultural resistance followed by a cultural takeover.

Perceived attractiveness of cultures in a merger

The problem in mergers is that people from very different organizations (and cultures) are expected to work together, to discuss, and to solve complex strategic and operative tasks. It is very difficult to impose a new culture that does not have the acceptance of these people. This perceived attractiveness of cultures can have the following impact on the integration process: 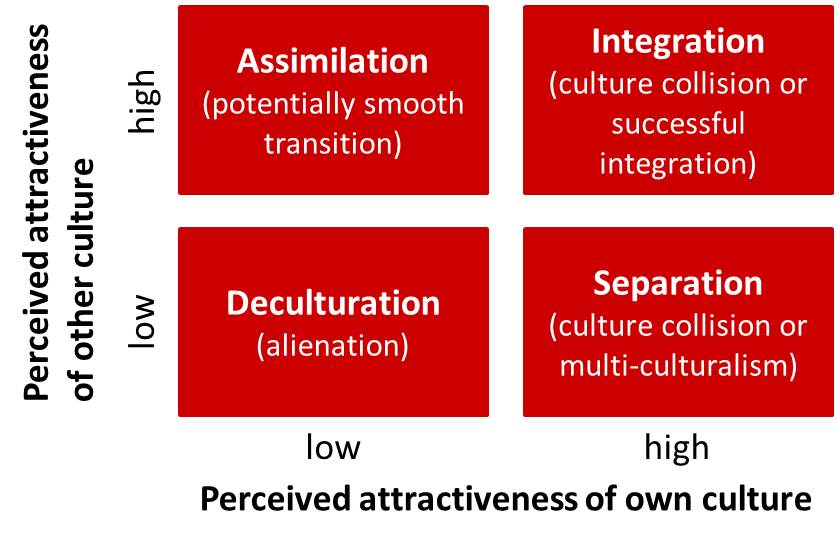 Perceived attractiveness of corporate cultures in a merger

Steps for a successful integration of corporate cultures in a merger

The cultural analysis is a tool for identification and overcoming of cultural differences between partners in mergers. A detailed analysis shows differences and common grounds between the people of both organizations. Thus, it allows improving interaction and communication.

Here is an example how this might look like. This style of analysis also provides an excellent visual presentation of results: 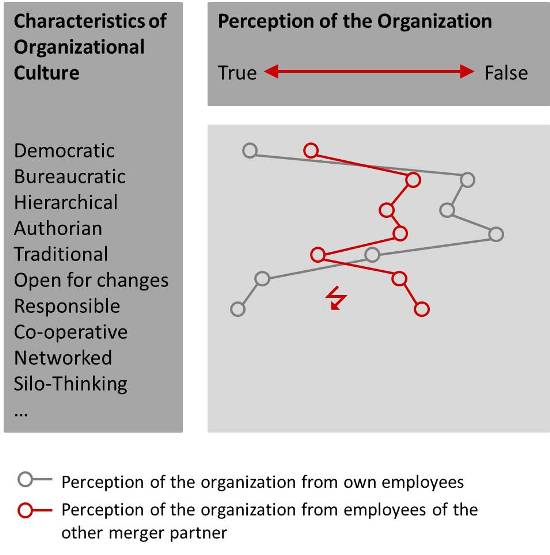 Cultural analyses – both partners in a merger perceive cultures differently

This analysis can be performed by comparing both partners’ perceptions of various features of corporate culture. The difference in perceptions of particular characteristics of cultures indicates potential conflicts.

Establishment of a common basis for a new culture

Another important step is the establishment of a new cultural basis on which the new culture can develop. The name of the new organization may take a key role in this process. The new name is a symbol for the changes that come along with the merger, and it indicates how much both old companies contribute to the new one.

Examples for changes in company names in mergers

Moreover, it is necessary to harmonize and to communicate all other elements that influence culture, e.g. reward systems, systems for performance measurement. Organizations that want to integrate both old cultures have to take care that no partner gets advantages or disadvantages. In order to avoid the backwards looking ‘us vs. them’-thinking, it is advisable to form new teams with people from both organizations. Practical experience has shown that at least 25% of staff should be allocated to new / other teams. Only than, everybody will realize that inevitable changes are on their way.

Other approaches to minimize cultural problems include

General recommendations for dealing with corporate culture in mergers

Our book recommendations for mergers and corporate culture